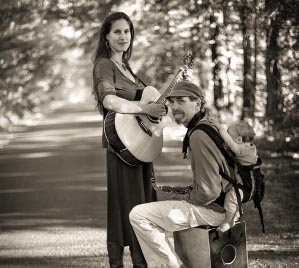 ~ Grounding Connection Through Music ~
Amanda West is an award winning singer-songwriter, recording artist, music teacher, and mother. Not afraid of the big questions, she asks: Who are we? Why are we here? What does it mean to be human, and how can we most deeply live our temporary and precious lives?

A native of California, Amanda grew up singing around campfires and began her career as a performing singer-songwriter when she was a teenager, after a serious car accident awakened her to the preciousness of life. Earning a Bachelor’s degree in Cultural Anthropology, she understands music to be a part of our universal human birthright, playing an essential role in our experience of being alive.

Offered in an angelic voice over folk fusion instrumentation, West’s all-original songs explore topics from humanity’s impact on the planet to musings on women’s role in society, intimate stories of love, and recipes for self-empowerment and cultural evolution. She sings of birth, death, and the life in between, approaching music is not as entertainment, but a sacred form of healing art.

With her musical & life partner, Pete Solomon, Amanda has toured the West Coast of the U.S. extensively and completed two UK/European tours, offering her "thoughtful heart songs" in a variety of places, including concert halls, spiritual centers, conferences and festivals. West has six self-produced CD’s under her belt, including one, “Truth, Love & Understanding”, themed on marriage, and another, “More Than Anything,” themed on new motherhood. Her latest collection of work, titled “Consanguinity” explores themes around family, the experience of womanhood, and the blood ties that bind us together. It is currently in studio production.

In addition to performing and recording her own music, Amanda co-leads a project called Womb Song, which offers offers singing circles for pregnant women, as well as labor and postpartum support through song. The history and science behind the benefits of singing through pregnancy, birth and post partum, are explored in a new chapter written by Amanda in the book "The Music of Motherhood: History, Healing and Activism", released by Demeter Press January 2018.

Finding herself at the unusual intersection where music and motherhood meet, West has become an advocate for musician mothers, leading a group called "Musician Mamas", offering support and inspiration for other women on the path. She also leads community singing circles, offers music for rituals and life passages (such as weddings and memorials) and teaches voice, guitar and songwriting.

For 2018 Amanda has accepted an Artist Residency in Motherhood as a way to simultaneously honor the artist self, musician's path, hard-earned career and current reality of motherhood. Follow her journey and be the first to hear about upcoming events and releases by joining the mailing list via the home page

To receive her monthly musings and stay updated on the latest happenings in Amanda’s music, please join the mailing list via the home page.